This is a story about sixteen generations of ancestors, from the fancy royal ones and the not-so-law-abiding ones all the way down to my own Dad. Sincere thanks to Mick Richardson, of the Sussex Family History Group, who first drew my attention to the royal connection on my Stanbridge line. I might never have figured it out on my own!

My 16th great-grandmother Jacquetta de Luxembourg was from a European royal family. After her first husband died, she married Richard Woodville. They got married in secret around 1437 and eventually had fourteen children.

Philippa Gregory wrote a novel based on Jacquetta’s life. It’s called The Lady of the Rivers, because Richard’s title was Earl Rivers.

Jacquetta and Richard’s eldest daughter married the king of England: King Edward IV. This made the whole family very rich and powerful, but it also put them right in the middle of a struggle for the crown.

During a battle in 1469, Richard and one of his sons were captured and beheaded.

Jacquetta lived for many years afterward. People said she was descended from a water goddess (like a mermaid). They said she used magic and cast spells. King Richard III even tried her for witchcraft, but Jacquetta was eventually found not-guilty.

One of her great-grandsons was the famous King Henry VIII.

Next  Anthony: A Great Knight

Thanks for following along! Please stay tuned for a new Storydello sequence–coming soon. In the meantime, you might like to learn more about Jacquetta and her parents, here.

I love to make these small stories when I have time between my published books and my day job as a librarian in Kingston, Ontario, Canada. If you enjoy this blog, you’re warmly invited to visit my website www.joannestanbridge.com, and my other blogs:
Weatherdello (Weather Photos)
Alphadello (Alphabetical Artwork)
Everdello (Behind the Scenes) 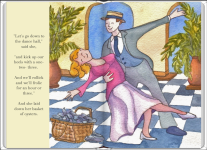